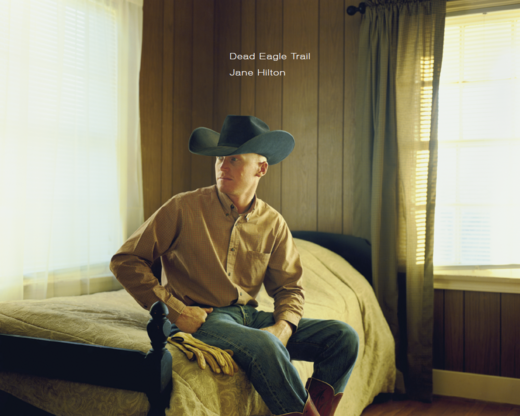 Jane Hilton’s first visit to North America was to Arizona in 1988. The enormous wide-open spaces, desert highways, and vast skies were the biggest contrast she had ever experienced to growing up in suburban England. This, combined with the warm memories of spending Sunday afternoons watching westerns with her father has contributed to Hilton’s affection for the wild west. There is definitely a romanticism that is associated with the gun-slinging cowboy, defending his land his moral code. These displays of heroism have been reinforced in novels such as Owen Wister’s The Virginian (1902), and films such as John Ford’s Stagecoach (1939), with the iconic John Wayne. American culture has been defined by the west, and the 'American Dream' evolved from it. The pioneering days of the gold rush and the evolution of towns such as Las Vegas illustrate the mantra of the people; anything is possible in America. Dead Eagle Trail is a culmination of numerous road trips Jane Hilton has taken across the States while documenting the American culture. This book is a celebration of the west, from the buckaroos of Nevada to the cow punchers of Arizona. Cowboys are photographed in their own homes, surrounded by western artifacts. The need to hold onto their heritage is clearly visible. As the price of petrol and animal feed rises, the ranches struggle to survive and the cowboy of the twenty-first century could become extinct.