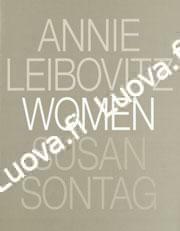 We assume a world with a boundless appetite for images, in which people, women and men, are eager to surrender themselves to the camera. But it is worth recalling that there are parts of the world where to be photographed is something off-limits to women. In a few countries where men have been mobilised for a veritable war against women, women scarcely appear at all. The imperial rights of the camera – to gaze at, to record, to exhibit anyone, anything – are an exemplary feature of modern life, as is the emancipation of women. The photographs by Annie Leibovitz in Women, taken especially for the book, encompass a broad spectrum of subjects: a rap artist, an astronaut, two Supreme Court justices, farmers, coal miners, movie stars, showgirls, rodeo riders, socialites, reporters, dancers, a maid, a general, a surgeon, the First Lady of the United States, the secretary of state, a senator, rock stars, prostitutes, teachers, singers, athletes, poets, writers, painters, musicians, theater directors, political activists, performance artists, and businesswomen. “Each of these pictures must stand on its own,” Susan Sontag writes in the essay that accompanies the portraits. “But the ensemble says, So this what women are now — as different, as varied, as heroic, as forlorn, as conventional, as unconventional as this.”