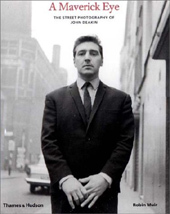 John Deakin’s extraordinary documentary photographs are haunting evocations of life on the streets of London, Paris and Rome in the 1950s and 1960s. His eye is a profoundly generous one and his chief focus is on ordinary life. His pictures of dog walkers, priests, nuns and shopkeepers reveal and empathy to tival that of Doisneau and Brassai. Equally intriguing are his depictions of human activity with the participants gone: a vanished vernacular of chalked-up children’s games, of graffitied messages of love or anger to the world, street signs, peeling wills, window shutters and shop-front banners – signals from another age. Revealed here is a far broader range of photography than that on which Deakin’s reputation has rested so far. But the creative souls and maverick talents that frequented the streets of Soho in its heyday – Francis Bacon and Lucian Freud among them – make their appearance along with anonymous figures and strong faces from Paris and Rome. Both friends and stars appear in Robin Muir’s introduction, which describes both Deakin the man and Deakin the artist. Following his death in 1972 his work lay neglected for a number of years and his reputation dwindled. A Maverick Eye restores him to his proper place and one of the great photographers of the postwar period.