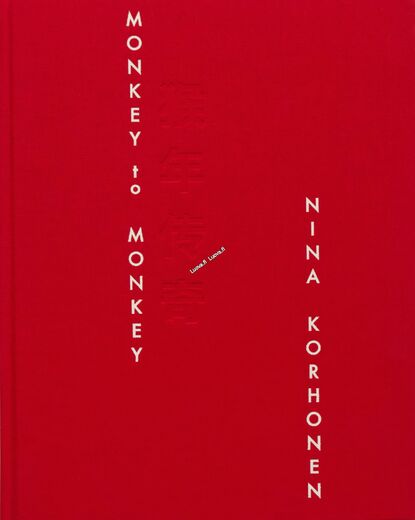 Some of the red ribbons twisted round the scraggy trunks of the trees depicted in the pace-setting photo in Nina Korhonen’s book Monkey to Monkey are so discolored and tattered that they might very well have been put there at the very beginning of the 12-year-cycle circumscribing the pictures in the book. On the other hand, Korhonen’s overall arrangement of pictures does not claim to sum up or to present a comprehensive understanding of this period. There are too many such Chinese times and Chinese places to render a summing-up feasible. On the contrary, Nina Korhonen makes it her narrative duty to undo the “natural” order of things. Pictures from the same locality show up in different places in the sequence of photos while pictures taken at different times are not seldom placed together because they share the same motif.
\n
\nThe Chinese animal zodiac is a repeating cycle of 12 years, with each year represented by an animal. 2004 and 2016 were “The Year of The Monkey”. All the photographs in the book were taken in China between 2004 and 2016.