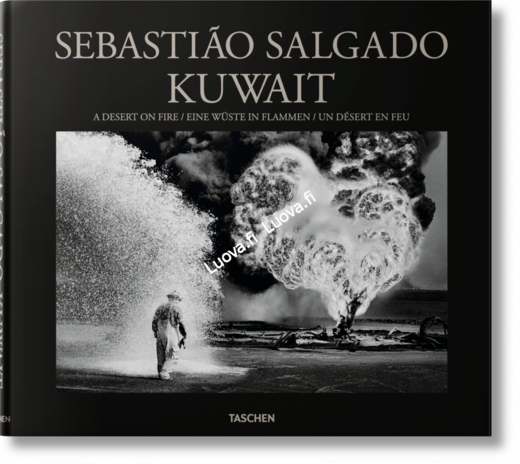 “We must remember that in the brutality of battle another such apocalypse is always just around the corner.” —Sebastião Salgado
\n
\nIn January and February 1991, as the United States-led coalition drove Iraqi forces out of Kuwait, Saddam Hussein’s troops retaliated with an inferno. At some 700 oil wells and an unspecified number of oil-filled low-lying areas they ignited vast, raging fires, creating one of the worst environmental disasters in living memory.
\n
\nAs the desperate efforts to contain and extinguish the conflagration progressed, Sebastião Salgado traveled to Kuwait to witness the crisis firsthand. The conditions were excruciating. The heat was so vicious that Salgado’s smallest lens warped. A journalist and another photographer were killed when a slick ignited as they crossed it. Sticking close to the firefighters, and with characteristic sensitivity to both human and environmental impact, Salgado captured the terrifying scale of this “huge theater the size of the planet”: the ravaged landscape; the sweltering temperatures; the air choking on charred sand and soot; the blistered remains of camels; the sand still littered with cluster bombs; and the flames and smoke soaring to the skies, blocking out the sunlight, dwarfing the oil-coated firefighters.
\n
\nSalgado’s epic pictures first appeared in the New York Times Magazine in June 1991 and were subsequently awarded the Oskar Barnack Award, recognizing outstanding images on the relationship between man and the environment. Kuwait: A Desert on Fire is the first monograph of this astonishing series. Like Genesis, Exodus, and The Children, it is as much a major document of modern history as an extraordinary body of photographic work.