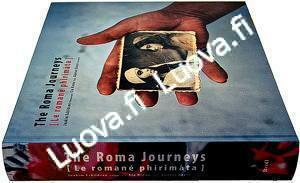 The Roma, Sinti, Calé and other ethnic groups collectively referred to as Gypsies form the largest minority in Europe. Scattered across the globe they live in almost every part of the world, each group marked by a distinct language, culture and situation. Throughout their history, the Roma have been subjected to persecution, expulsions across Europe, slavery in Romania, prohibition on the use of the Romany language, and other creative attempts to misuse, assimilate or extinguish their people. Many Roma still have to deal with discrimination on various levels, and in all European countries, the general attitude towards them is at least suspicious. Cia Rinne and Joakim Eskildsen travelled to meet Roma in seven different countries between 2000 and 2006, often staying with families for long periods in order to learn about their life, their culture, and their situation. The Roma Journeys is a very personal document of these encounters, giving a contemporary view of the lives of the Roma people and their situation today.