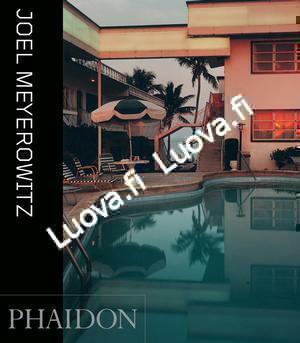 An introduction to the pioneering work of Joel Meyerowitz (b.1938),
one of photography’s great innovators and a highly influential teacher still working today.

This monograph forms an introduction to the major themes and the key images of American photographer Joel Meyerowitz, illustrated with 55 chronologically-presented images that offer a fresh insight into his career. An introductory essay by Colin Westerbeck discusses Meyerowitz’s life and work and places him both in the context of his time and within the history of photography. Born in 1938 in New York City, Meyerowitz went to Ohio to study painting and medical drawing at the State University but moved back to New York to work in advertising as an art director-designer. He then started to take photographs, leaving his job to concentrate on his new career. Shooting film in black-and-white, he travelled around the United States for three months after which he was offered a Guggenheim Scholarship to take pictures on the theme of 'leisure time'. It is as an early advocate of colour photography that Meyerowitz has had the greatest influence, for he was instrumental in changing the attitude toward the use of colour from one of resistance to nearly universal acceptance. His subject matter evolved from incidents on city streets shot with a small 35 mm camera to the large format field photograph. Architecture, light and space – particularly at Cape Cod – acquired a new interest for him. After the destruction of the World Trade Center in New York, he was the only photographer granted unimpeded access to Ground Zero where he systematically documented the work of demolition and excavation, rescue and recovery. He has been awarded the title Photographer of the Year by the Friends of Photography, San Francisco. His work is in the collections of the Museum of Modern Art and the Metropolitan Museum of Art, both in New York and he has been exhibited and published worldwide, for many years.