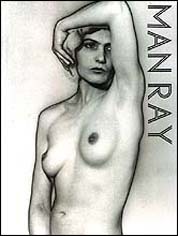 This text explores the photographic career of Man Ray whose fertile artistic impulse has made him equally celebrated as a painter, sculptor, writer and film-maker. Taking up photography in 1915 for the purpose of reproducing his paintings, he earned money doing the same for others when he went to live and work in Paris in 1921. This led to a career in photography ranging from portraits of celebrated artists, musicians and writers such as Andre breton, Marcel Duchamp, Erik Satie, Arnold Schoenberg, T.S. Elliot and Gertrude Stein, to the pictures using light effects outside the camera for which he is famous: cliche-verres, rayographs and solarizations. Alongside many of Man-Ray’s classic images, this collection presents a huge number of less familiar photographs, including portraits of Virginia Woolf and of Antonin Artaud and a large selection of erotic pictures. Most of these are from the collection of Lucien Treillard, a personal friend who worked with the artist over many years cataloguing and archiving his photographs.