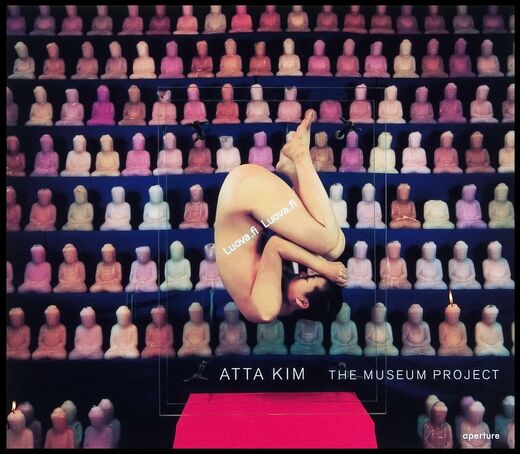 In The Museum Project, Korean photographer Atta Kim commandeers average scenes—city streets, department stores, freight depots, and forests—and turns them into exhibition spaces. On display are people crammed into acrylic boxes, stacked in sets, on end, or sometimes alone. In selecting his subjects and isolating them in their boxes, Kim aims to “detach them from reality; to display and deconstruct at the same time my own concept of the world.” Kim compares his efforts to that of an archaeologist, sifting through the cultural strata in order to unearth and hold up exemplary objects for our contemplation. The Museum Project is comprised of a number of series, such as “War Memorial,” “Sex,” “Suicide,” and other human typologies, each intended to highlight a particular mode of behavior or belief. In certain series, the subjects are isolated from their natural settings, each display case simply framed and offset by backdrops in primary colors. The resulting images are curious and startling, straddling the indeterminate ground between performance, photography, and an alternate form of anthropology. “The subject of history is, finally, nothing but human beings,” Kim says. “[The] great order of . . . the cosmos is that all kinds of acts conducted by human beings are always watched by someone.” Atta Kim was born in Korea in 1956. He graduated from Changwon University with a Bachelor of Science degree and has been actively photographing since the mid-1980s. He has had solo shows at the Samsung Photo Gallery, Seoul; the Nikon Salon Gallery, Tokyo; the Yechong Gallery, Seoul; and has been included in numerous group exhibitions, including shows at the Museum of Contemporary Photography in Chicago; The Odens Foto Triennale in Odens, Denmark; the Australian Centre for Photography; the twenty-fifth SNo Paolo Bienal; and FotoFest in Houston.