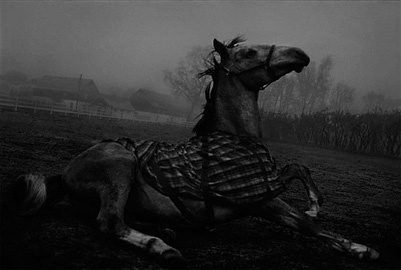 From Back Home is a collaboration between two of Sweden’s leading photographers, Anders Petersen (b. 1944) and JH Engström (b. 1969), focusing on the Värmland region, one of the most sparsely populated provinces in Sweden. The two photographers have a shared relationship with the land—they both come from this region—as well as a strong personal relationship. Engström worked as Petersen’s assistant and the older man is a major influence for him.

The book won the Author Book Award at Rencontres d’Arles 2009, and deservedly so. The book is split into two parts, first Petersen’s images followed by Engström’s. Petersen’s section starts with the birth of a child suggesting that this will be a journey of intense discovery. The first few images immediately set a mystical, slightly oppressive, dark and lonely tone.