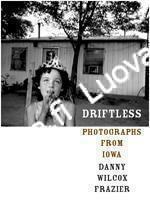 The Center for Documentary Studies / Honickman First Book Prize in Photography presents the winning book in this important series celebrating American photography “Driftless is Frazier’s document about rural Iowa. His home. . . . Years of working, walking, photographing, carefully making notes, names, places. . . . Inhabitants: Farmers, Migrant Workers, their families, Hunters, Churches, Trailers, Storms, Open Fields, Sunday Night. . . . Passionate photographs without sentimentality. . . . his work reaches out: let me tell your story, it is important. Frazier’s work will survive—his book will be the foundation for more to come. . . .” —Robert Frank, Prize Judge “I wanted to explore the lives of the people who stay, who are casualties of the growing economic divide that separates America’s rural and metropolitan classes. Having lived in Iowa all my life, these forgotten communities are part of my own history.” —Danny Wilcox Frazier In Driftless, Danny Wilcox Frazier’s dramatic black-and-white photographs portray a changing Midwest of vanishing towns and transformed landscapes. As rural economies fail, people and resources are migrating to the coasts and cities, as though the heart of America were being emptied. Frazier’s arresting photographs take us into Iowa’s abandoned places and illuminate the lives of those people who stay behind and continue to live there: young people at leisure, fishermen on the Mississippi, veterans on Memorial Day, Amish women playing cards, as well as more recent arrivals, Lubavitcher Hasidic Jews at prayer, Latinos at work in the fields. Frazier’s camera finds these newcomers while it also captures activities that seemingly have gone on forever; harvesting and hunting, celebrating and socializing, praying and surviving. Poetic and dark but illuminated with flashes of insight, this collection of photographs is a portrait of contemporary rural Iowa, but it is also more that that. It shows what is happening in many rural and out-of-the-way communities all over the United States, where people find ways to get by in the wake of closing factories and the demise of family farms. Taken by a true insider who has lived in Iowa his entire life, Frazier’s photographs are rich in emotion and give expression to the hopes and desires of the people who remain, whose needs and wants are complicated by the economic realities remaking rural America. Danny Wilcox Frazier is a freelance photographer. Raised in Le Claire, a small Iowa town that sits along the Mississippi River, he now lives in Iowa City. Frazier has a master’s degree from the University of Iowa, and he has received awards from the University of Missouri’s Pictures of the Year International, including its 2004 Community Awareness Award for selections of his work from Iowa. He has also received a Stanley Fellowship, as well as awards from the National Press Photographers Association and the Society of Professional Journalists. His images have appeared in such publications as the New York Times, Time, Newsweek, Mother Jones, U.S. News & World Report, Life, and Forbes. Robert Frank is one of America’s preeminent photographers. His complex and visionary photographs of postwar America, as well as his later films and videos, have greatly influenced the work of generations of artists. Frank’s book The Americans (1958) brought him international attention and marked a turning point in photography. The National Gallery of Art in Washington founded the Robert Frank Collection in 1990. He has received numerous awards, including an International Photography Award from the Hasselblad Foundation in Sweden and a Cornell Capa Award from the International Center of Photography in New York.