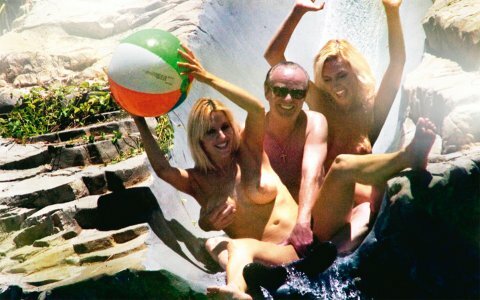 What you see in this book is not “real” Alison Jackson has photographed the Queen of England on the toilet, George Bush and Tony Blair chatting in the sauna, Mick Jagger doing gymnastics, and Monica Lewinsky lighting Bill Clinton’s cigar. Or has she? The likenesses are uncanny, but of course, her subjects are look-alikes. Her photos demonstrate that while seeing is believing, the truth is another story entirely. In her work, Jackson says, “Likeness becomes real and fantasy touches on the believable. The viewer is suspended in disbelief. I try to highlight the psychological relationship between what we see and what we imagine. This is bound up in our need to look—our voyeurism—and our need to believe.” Indeed, by showing “celebrities” ostensibly caught unawares, Jackson’s pictures show us what we imagine might go on behind closed doors. Jackson’s work causes controversy, because it threatens to cross the line between the private and public life of our contemporary icons. Because we unquestioningly accept the authenticity of the photograph, it would appear that we are being given a glimpse of something confidential, a private moment. It is only upon closer examination that we question the reality of the image, and hopefully this makes us question our unwitting tendency to believe everything we see in the media today. For this edition, Jackson has been commissioned to shoot a broad selection of new portraits of dead-ringers for Brad Pitt and Angelina Jolie, George Bush, J. Lo, Eminem, Britney Spears, Jude Law, Nicole Kidman, Tom Cruise, and many more. Expect the unexpected! With essays by Will Self, Charles Glass, and William Ewing. Will Self is the author of five novels, four collections of short stories, three novellas and five non-fiction books. He is also a contributor and a columnist for many publications including The Independent and Evening Standard newspapers in London, where he lives. His latest novel is The Book of Dave (2006). Charles Glass is the author of, among other books, The Tribes Triumphant (2006). He was ABC News Chief Middle East Correspondent and has written for Granta, The London Review of Books, The Spectator and The Times Literary Supplement. William Ewing, currently director of the Musée de l’Eysée, Lausanne, is a noted author and photography curator. His exhibitions have been shown at the MoMA and the International Center of Photography, New York, and many other museums and galleries worldwide. His most recent book is Face: The New Photographic Portrait (2006), and he is celebrated as author of The Body (1994). All photographs © Alison Jackson All well-known individuals depicted in this book are not “real.” The photographs have been created using look-alikes. The well-known individuals have not had any involvement in the creation of the photographs and they have not approved them, nor has their approval been sought for the publication of these photographs. About the artist: After studying fine art photography at London’s Royal College of Art, Alison Jackson shocked the world with her award-winning BBC TV series, “Double Take.” She has exhibited her artwork in contemporary art galleries and museums throughout Europe and North America, and also works in the medium of mass communication, via films, advertising, television, and books.