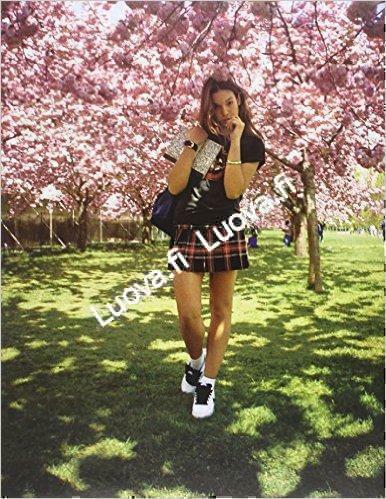 There is something powerfully erotic about Catholic schoolgirl uniforms. The blazer or sweater, the immaculate white shirt, the pleated skirt, the knee socks and athletic shoes are the stuff of legend. It s a charming fetish, as psycho-sexually resonant as the black motorcycle jacket or the nurse s uniform. Intended to bring equal status to the student body, and to induce its wearers to behave, the uniform often embodies a nascent rebellion against sexual repression. With Katlick School, Sante D Orazio has produced a witty visual narrative of flirtation, starring a beautiful Latina schoolgirl named Kat. She holds her notebook like a shield to ward off advances. But with her skirt hiked up and snaps not buttons on her shirt, there s a hint of come-hither. We soon discover that the pleated skirt conceals Snoopy bikini underwear and a tattoo. Kat is willing to trade her trainers for thigh high spike heeled boots and as the fantasy unfolds we get to see her entirely out of uniform. Obviously, she is committed to rounding out her education As the Red Hot Chili Peppers sang, Catholic school girls rule!