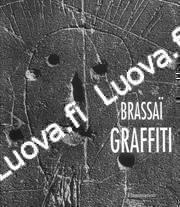 Brassaï became interested in the marginal art form of graffiti in the 1930s, seeing it as a form of outsider art that could open the door to new forms of artistic expression. His atmospheric photographs capture the essence of this unfettered creation. Stark contrasts of black and white alternate with softer shades of grey that meld into one another, smoothing the harsh gouges typical of graffiti. Several of these photographs first appeared in the Surrealist review Minotaure; others were first published in France and Germany in 1960, in a work entitled Graffiti, which accompanied an exhibition that visited New York, London, Milan, Baden-Baden, Frankfurt, Hannover, and Paris. The approach was hugely influential, both for the Surrealists and in the domain of Outsider Art. Accompanying the photographs are selections from previously unpublished writings, including extracts from Brassaï’s own notebooks, in which he noted the presence of elements of graffiti on the walls of Paris that he intended to photograph. The book also contains an interview with Picasso on the subject of graffiti as an art form. This first English language version of this classic title is a beautifully produced edition of what is undoubtedly a seminal work in the history of modern photography.