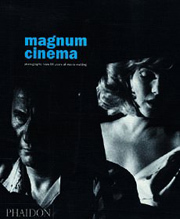 The photographers associated with Magnum have worked with movie-makers since its creation nearly 50 years ago. Robert Capa, one of the founders of Magnum, had many friends in the film business – including Ingrid Bergman, Hunphrey Bogart, Billy Wilder and John Huston – which gave him, and through him the other Magnum photographers, access to the charmed world of Hollywood. This connection with the film world has continued to the present day and widened to include movie-makers all over the world. The resulting on and off set photographs gathered together in this book include intimate portraits of such screen legends as Marilyn Monroe, Clint Eastwood, Ingrid Bergman, James Dean, Clark Gable and many others, as well as outstanding directors, including Alfred Hitchcock, Carol Reed, Francois Truffaut and Andrei Tarkovsky. The roll call of over 50 leading photographers includes Eve Arnold, Robert Capa, Henri Cartier-Bresson, Raymond Depardon, Philippe Halsman, Elliott Erwitt, David Seymour and Dennis Stock.