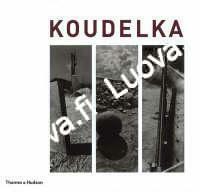 Josef Koudelka’s work has received acclaim over the past three decades as a uniquely significant contribution to the language of photography. Koudelka is the first book to present over 150 of his most eloquent images in a single volume, from his earliest images – published here for the first time – to his most recent panoramic landscape studies. Robert Delpire, Koudelka’s longtime French publisher, collaborated with the artist in conceiving and producing this title. The other essayists in Koudelka each explore a different aspect of the artist’s work, illustrating his constant evolution and intensity. — Blackwell North Amer Presents photographs of avant-garde theatre, gypsies on the steppes of Eastern Europe, resistance to Soviet guns and tanks advancing on Prague, the environmental degradation of a crumbled empire, and more. This book contains images, produced by Josef Koudelka, that provoke a connection to the larger questions of human existence. — Gardners