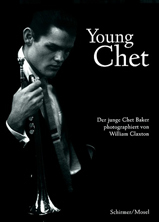 Chet Baker was twenty-one when Charlie Parker discovered him and introduced him to such stars as Stan Getz and Gerry Mulligan. It was the beginning of a meteoric rise to fame. Within a year, his melancholy, seductively elegant trumpet solos and his silken voice had made him the epitome of “West Coast cool jazz,” which expressed a whole generation’s attitude to life. Marked by drug addiction, several arrests and unsuccessful comeback attempts Chet Baker died at age fifty-nine in Amsterdam. In images and reminiscences by jazz photographer William Claxton, this book provides a record of Chet Baker’s glorious early years, from 1952 to 1957, when he was still being called the “James Dean of jazz.” Claxton accompanied the wonder boy of Californian jazz to concerts, performances, and studio sessions. His photographs show a dreamy, introverted Chet Baker whose charisma and appearance match the suggestiveness of his art. Texts by Chris Caujolle and William Claxton Chet Baker, born in 1929 in Yale, OK, won a trumpet audition with Charlie Parker and joined the Gerry Mulligan’s Quartet in 1952. Forming his own quartet in 1954, he toured the US and Europe. A heroin addict, he was in jail several times in the 1960s. Starting a second career in the 1970s, he died in Amsterdam in 1988 falling out of a hotel room window. William Claxton, a member of the Californian jazz scene, co-founder of Pacific records and the author of the book Jazz Seen, shaped the jazz imagery with revolutionary photographs and record covers. Chris Caujolle, born in France in 1953, is the director of the Paris-based photo agency and gallery, VU. He worked as artistic director of photography festivals in Arles, Rotterdam, and Madrid.