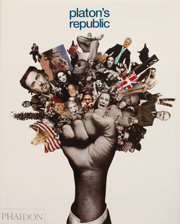 Platon’s Republic embodies a dynamic collection of unique celebrity portraits by the groundbreaking British-born, New York-based, fashion photographer Platon. Over 120 photographs have been selected from an enormous range of powerful images taken over the last decade: altogether they constitute an unprecedented cross-section through the cult of fame and power. Platon’s Republic is a window on to today’s media-led culture that bombards, and sometimes overwhelms, us with images of world-wide importance juxtaposed with those of frivolity. This aesthetically magnetic edition replicates the same intense and sometimes surreal experience with portraits of US and UK celebrities such as Al Pacino, Bill Clinton, Vivienne Westwood and Leonard Cohen – as well as documentary photographs of Jesse Jackson and Bianca Jagger protesting against the death penalty and football supporters. Granted extraordinary access to some of the West’s most powerful people, Platon’s subjects are all leaders in their field. Whether they are from the TV industry, politicians, actors, fashion designers, writers or musicians, each individual subject wields enormous influence within their arena. Platon’s portraits are distinctly graphic and intimate: the unusual angles he adopts to capture his subjects' revealing expressions are his hallmark. This book comprises not only the most extensive compilation of Platon’s work today, but a thought-provoking and absorbing document of human character in general. “synopsis” may belong to another edition of this title.