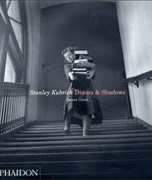 Stanley Kubrick: Drama and Shadows is the first publication of early photographs by renowned filmmaker Stanley Kubrick (1928–1999), taken between 1945 and 1950 — many of them never before seen by the general public. Kubrick made these photographs while he was a staff photographer for the New York–based Look magazine, following his graduation from high school and before he made his first films. Aimed at a broad audience, Stanley Kubrick: Drama and Shadows reveals the director’s early experimentations with image composition and his attraction to dramatic, often psychologically intense subjects and narratives that would both become elements of his recognizable style as a director. Divided into four thematic chapters (“Metropolitan Life,” “Entertainment,” “Celebrities,” and “Human Behavior”), this book features a carefully selected group of approximately 350 photographs organized into approximately thirty photographic stories. An insightful introductory essay provides context and examines Kubrick’s photographs in relation to the history of photography.