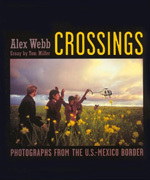 The United States-Mexico border — a ribbon of land some two thousand miles long and ten miles wide that is home to twelve million people — is a narrow strip where cultural differences between the two lands are blurred, where an atmosphere of transience and crossings dominates. Noted photographer Alex Webb has spent more than twenty-five years covering the region, and his work captures the humor and pathos, paradox and tragedy, of life in the borderland. Webb’s photographs illuminate the precarious world of illegal border crossers: tedious waits along the fence, late-night bridge traversals, clandestine travels north, detainments and arrests. Yet his images also suggest crossings that are cultural, economic, and spiritual in nature, such as nightclubs and religious celebrations, tourists and day laborers, fiestas and swap meets. Equally striking is his vision of Tijuana, El Paso, and other legendary border towns. Complementing the photographs is an essay by Tom Miller, who has been writing about the American Southwest and Latin America for more than three decades and first covered the border with Alex Webb in the 1970s. Miller focuses on the constant interweaving of fusion and division, unexpected felicity and devastating misery. Together, writer and photographer offer an indelible portrait of the complex, culturally rich land of the border. Alex Webb’s photography books include From the Sunshine State: Photographs of Florida, Amazon: From the Floodplains to the Clouds, Under a Grudging Sun: Photographs from Haiti Liberé, Hot Light/Half-Made Worlds: Photographs from the Tropics, and the limited edition Dislocations. A member of Magnum Photos since 1979, he has received numerous awards and fellowships. Webb’s work has been exhibited worldwide, and his images are in the collections of the Whitney Museum of American Art, the Metropolitan Museum of Art, and the International Center for Photography. His photographs have been published in the New York Times Magazine, Life, Geo, National Geographic, Aperture, and many other magazines. Tom Miller’s eight books include On the Border, The Panama Hat Trail, and Jack Ruby’s Kitchen Sink, which won the 2001 Lowell Thomas Award for best travel book of the year. He has contributed to Smithsonian, Life, Natural History, and the New York Times, among other publications.